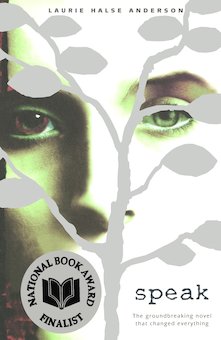 The summer before her freshman year of high school, Melinda Sordino meets Andy Evans at a party. Outside in the woods, Andy rapes her. Melinda calls 911, but does not know what to say. The police come and break up the party. Melinda does not tell anyone what happened to her, and no one asks. She starts high school as an outcast, shunned by her peers for calling the police. She remains silent and sinks into depression. Melinda is befriended by Heather, a new girl, who clings to Melinda only to ditch her for "the Marthas". As Melinda's depression deepens, she begins to skip school, withdrawing from her parents and other authority figures, who see her silence as means of getting "attention". Only in Mr. Freeman's art class can Melinda express her inner struggle, as he shows interest in her artwork. She slowly befriends her lab partner, David Petrakis, who encourages her to speak up for herself.
Throughout the school year, the past unfolds and Melinda gains the strength to confront what happened to her.[2] Melinda learns that "IT", Andy Evans, goes to her school. Eventually, she allows memories of what happened the night she was raped to surface. But she remains silent. However, when her ex-best friend, Rachel, starts to date Andy, Melinda feels obligated to warn her. At first, Rachel ignores the warning. Melinda tries again, telling Rachel that Andy raped her at the party, but Rachel does not believe her.